I hope to see you all at the Twilight Picnic tonight.

Here is the set list for the choir gig next week at Gracelands Manor on Friday 6th December. Please can all choir members have a practice at home before next Wednesday’s rehearsal.

Eye of the Tiger

Rocking Around the Christmas Tree

I wish it could be Christmas Everyday

All choir students should have their words, please come and see me or use attached documents,

Please find attached the performance track and the backing track for the two songs we will be performing at the Twilight picnic.

The performance track has children singing to help. The backing track is just the music- challenge yourself with this if you can!

Make sure you’ve handed in the letter to me so you can participate.

Students really impressed me last week with their recorder skills. Most students have picked up the recorder and able to play simple songs as well as reading the recorder music easily. They will be on black belt before you know it… we will continue learning songs and when they’re ready students will try out composing their own songs. I’ll be sure to post some videos once this happens. 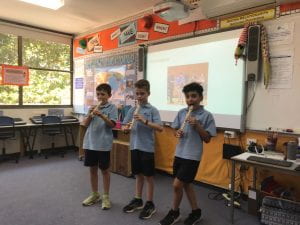 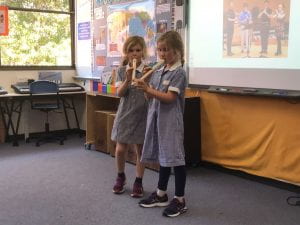 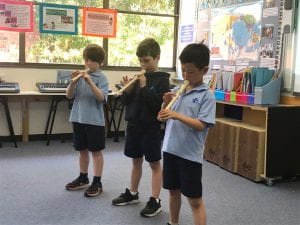 Enjoy the sunshine everyone.

Parents and carers, please check compass if your child is in choir as we have 2 gigs coming up this term! Any questions, please contact me.

I hope your holidays were wonderful! Term 4 gets busier and busier and the students have lots to look forward to. Students have been amazing and I am looking forward to teaching some more skills and seeing some amazing performance.

I will be taking Foundation students around the world this term as they listen and play world Music. Students have learnt some information about African drumming and djembes as well as learning a famous South African and Ghanaian songs. Their Geography skills and knowledge has already astounded me.

Years 1 and 2 have started playing the recorder and are doing a fantastic job of reading Music. They are doing recorder karate and each week will change belt colour by the end doing some of their own composition!

In Music students are looking at various pop songs and learning how to play chords on the keyboards, as well as experimenting with other pop elements, playing riffs and singing.

Students have just done some choreography and thought about the importance of gestures in Drama and Dance and how this adds narrative. See below! In Music, students will researched pop performance and learn the basic elements of a pop song; how chords are used on different instruments and how riffs are used to make a song memorable to an audience. Students will apply this knowledge practically and will keyboards, guitar, ukulele and drums. 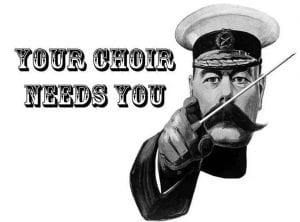 Choir continues on a Friday lunchtime.

Looking forward to another jam packed term. A great start so far.

I hope everybody has recovered from last week’s epic performance! It was utterly wonderful and all parents, friends and family who came to see I hope you were as blown away as me.

So this term Foundation have been doing some great work so I thought I would highlight the curriculum. they have been studying boomwhackers. 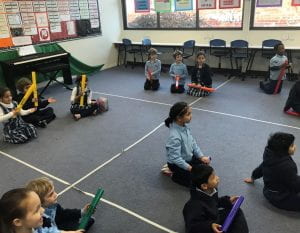 A boomwhacker is a lightweight, hollow, color-coded, plastic tube, tuned to a musical pitch by length. Boomwhackers are used as musical instruments in the percussion family. They are fantastic starter instruments and we are aiming to get here:

Well… maybe not quite however they are getting close! Foundation students have learned all about tempo and dynamics and can tell the difference between the notes. They are doing a fantastic job, please ask at home about what they have studied in Music because they will be sure to tell you!

Have a fantastic weekend everyone and enjoy the sunshine.

Welcome back to Term 3!

Rehearsals for our school production are now in full swing and we can’t WAIT to show you the students talent that we have! 5/6s have been working so so hard with rehearsals and the rest of the school have been working with professional choreographers STOMP to make the dances amazing. 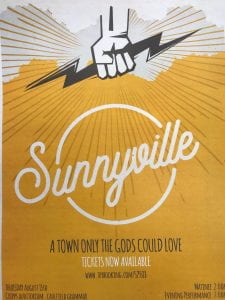 Tickets are selling FAST! Get your tickets for matinee or evening performance:

Foundation: Boomwhackers and Rhythm in Music

Choir continues! Every Friday lunchtime from years 1-6. Come and have a sing

All students have been singing and dancing each week with me as well as with their classroom teachers. There is so much energy this term.

Looking forward to seeing you all on August 15th.

We are in full swing to term 2 and students are really progressing in Drama and Music.

Foundation students have started acting out stories and looking into storytelling. There have been some fantastic narrators in Tidalik the Frog this week. This is their first week of performing to the audience and they are doing really well.

Year 1&2 continue to explore around the world in Music and went to Jamaica this week to see reggae and ska as well as singing Bob Marley on the ukulele. They have also been singing an indigenous Australian songs and learning about how a didgeridoo is made.

Year 3&4 have made such progress on the ukulele and have now learnt 3 chords. We also had some great guitarists showcasing their chord skills this week.

Year 5&6 are singing their hearts out and not only are singing in unison but are experimenting with harmonies and call and response songs. They have fully composed lyrics and performed to their classes.

The production rehearsals are in full swing and they are focusing on how to change their voice and movement in character, as well as reacting and exaggerating their facial expressions. I am SO impressed so far at their efforts and know it’s going to be a great term 3 production. Keep up the great work. 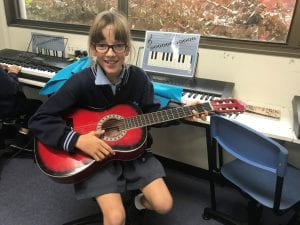 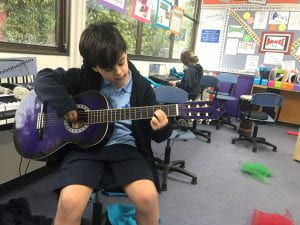 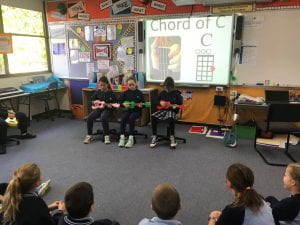 Dear all, I hope you all had a lovely and restful Easter break.

It’s been a mad start to Term 2 – in a good way and students have got stuck into the new Performing Arts Programme with effort and enthusiasm. I am very excited to be starting rehearsals for the School Concert that will be in August- watch this space for more information and 5/6 rehearsals!

Foundation
Foundation have started learning about fairytales. They have been exposed to some puppet theatre and learnt a few songs from Little Red Riding Hood (Ask students to sing a song about how much Little Red Riding Hood loves red)! They have also done rhythms to Jack and the Beanstalk and will be learning African Folk Tale son the djembe drum. 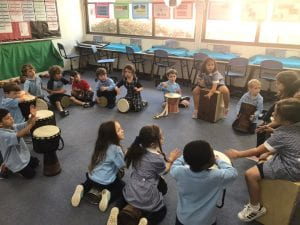 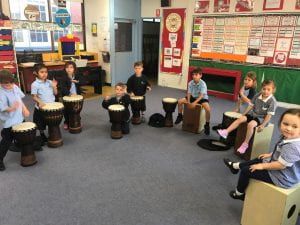 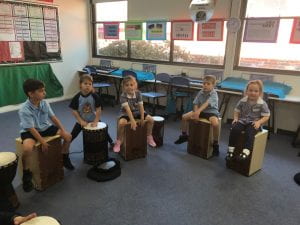 I will be taking years 1&2 round the world this term as they listen and play world Music. Students have learnt some information about African drumming and djembes as well as learning a famous South African song Toom Bah Ee lero. Get ready to visit Australia, Ireland, Italy, Jamaica…. Poland… the list goes on. 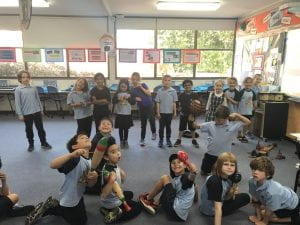 We have had a lovely start to the term and are working on our ukulele skills. Students will be building up to playing a song with 3 to 4 chords and have learnt how to hold a ukulele and various components. 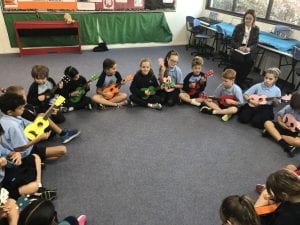 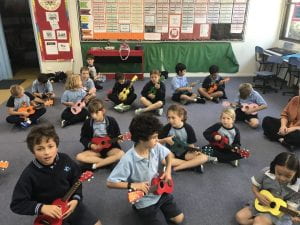 Years 5&6
Students have been cast in the play. Auditions were taken very seriously and were of an incredibly high standard. It was lovely to see so many students in different roles. Students will read through the play in week 3- they will all have to learn their lines and I will assist with this. Please support at home as much as you can without risk of spoiling the story for you all in August!
I am sure students will have a great week in Canberra and I look forward to hearing all about it.

Choir continues at a changed time on Wednesday lunchtime at 1.15-1.45 to accommodate all sports and other morning activities.

Welcome to the Performing Arts blog 2019!

Term 1 has been absolutely fantastic and I have love meeting all the classes and starting the Performing Arts Program. As a new teacher in the school it has been a pleasure to see how the students have progressed and I am really looking forward to next term.

Here is a rundown of what each year group has been doing this term. 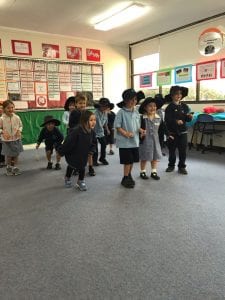 We have done lots of percussion work with shaky eggs, triangles, claves and tambourines. Students have been introduced to different notes through the boomwhackers. 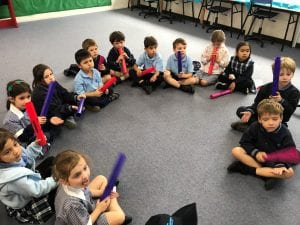 This term Drama has been the focus and we have been understanding how to tell a story through a derelict house called Darkwood Manor.

Students have done a lot of collaborative group work and been introduced to the concept of ‘teacher in role’ as a character. The students then react in character to the scenarios. It has been challenging though the students’ imaginations have been incredible. Students have learnt what a roleplay is, how to change their voices and movement to become a character and other dramatic techniques such as absent focus (looking out to the audience and pretending what is there) as well as still image and slow motion.

Students in years 3&4 have been philosophizing the quirky fairy tale ‘The Paper Bag Princess.’ The Paper Bag Princess tells the story of an unconventional princess named Elizabeth. She begins happily in her castle preparing to marry Prince Ronald. Unfortunately, a dragon swoops down, burns down the castle and everything with it, and kidnaps Prince Ronald. Elizabeth thus dons the glorious paper bag and sets off to save Ronald. When she encounters the dragon, Elizabeth outwits him by asking him to perform feats of strength until he passes out. Elizabeth then passes the dragon and goes to save Ronald. However, when Ronald sees Elizabeth in a paper bag, rather than beautiful princess clothes, he is aghast. Ronald yells at Elizabeth to come back when she looks like a “real princess”. Our heroic Paper Bag Princess swiftly replies by saying, “You look like a real Prince, but you are a bum.” She takes off her crown, and gleefully dances into the sunset.

This term we have focused on what the conventional Princess may look like and philosophizing and questioning traditional gender roles of a fairy tale. We have explored this through studying various characterization skills and thought clearly about voice, movement and character. The students performed the entire story last week and have shown very clear progression in their acting and performing skills.

Year 5 & 6 have had an introductory unit to Drama this term and looked at various ingredients of Storytelling and how to make storytelling interesting to an audience. We have explored what a climax of a story should look like and how contract is characters add to dramatic tension. Students have looked at various tribes in the Amazon rainforest and devised explorer characters from their imagination. The explorers went to the amazon rainforest. We have used various techniques to add detail to character such as hot seating and questioning everybody in their characters. Student used role on the wall to further details thoughts and feeling of the character.  Students have used these characters in various scenes and roleplays this term and devised scenes using new Drama techniques learnt. Students have explored the contrast of split scene, thought tracking, narration and still image. They have begun to make detailed and extensive scenes with their character.

Last week students auditioned for the whole school production which is happening on August 15th 2019. Rehearsals will start very soon after students are assigned their roles in Term 2.

Choir has started and we have had some lovely tunes and harmonies coming from the Performing Arts room on a Wednesday morning! Choir is currently at 8.30am on Wednesdays and all students from years 1-6 are welcome. Watch this space for a concerts.

Have a lovely Easter and break everyone, see you bright and ready for Term 2!

Ripponlea Primary Choir sang amazingly to a large audience on Saturday at Hank Marvin Market in Alma Park as part of our end of year celebration concert.

Wishing you all a safe, relaxing holiday and please enjoy listening to your amazing sing.  Well done and please keep singing! 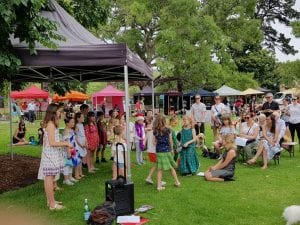